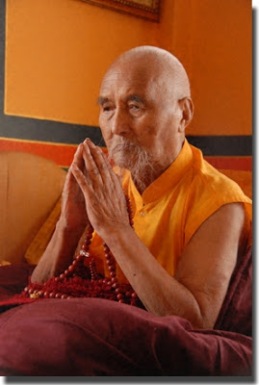 One last glimpse of Drubwang Rinpoche before his parinirvana

Today, i would like to share a short practice on Chenrezig for anyone who wishes to do this practice.  It was written by the Holy Mahasiddha Drubwang Konchok Norbu Rinpoche (left).  Many people have heard of this master who recently passed into parinirvana in 2007.  He belongs to the Drikung Kagyu Tradition and has attained complete enlightenment due to his efforts in one life.  A contemporary Milarepa, he did retreat for more than 30 years in difficult circumstances and almost no resources.   Many great masters like the Dalai Lama, Garchen Rinpoche, Drikung Chetsang Rinpoche, Khenpo Tsultrim Gyamtso Rinpoche deeply respect his accomplishment. One of the unique thing about Drubwang Rinpoche is that due to a prophecy he received from Guru Rinpoche in a direct vision,  he would only teach people to do the recitation of the mani mantra almost exclusively.  Sometimes he also advises people to recite the Guru Rinpoche mantra and the Amitabha mantra (these three mantras are collectively the mantras of the 3 kayas or 3 dimensions of a enlightened Buddha mind).

Drubwang Rinpoche completed more than 12 cycles of 100 million mani mantras himself and he has always widely and fearlessly proclaimed that the mani mantra is the all-sufficient and complete practice in itself.  That the mani mantra is the Buddha, that the mani mantra can bring us to realize our true nature of the mind (the inner Buddha) and it can eradicate all the past karmic obscurations and bring us to the pureland.  Especially he has always emphasized that the benefits of the mani mantra, though not obvious now, would be extremely potent and beneficial after our death.  Rinpoche said that for busy people like us with little inclination for more complicated practices, the mani practice can be a most helpful companion in our lives and we should recite the mantra all the time, everywhere.  Rinpoche would even recite this mantra in his sleep.

Now, i will write abit about this precious mantra.  It has been stated that any other form of virtue carries the danger of being destroyed by the power of aggression or other emotions, whereas the recitation of the mani mantra cannot be destroyed by any external, internal or secret force.  There are two kinds of merits: perfect and ordinary merit.  Perfect merit can only be attained if the three excellences of pure motivation of Bodhichitta, pure main practice free from conceptualizations and pure dedication are present in the act of virtue.  However, for the mani mantra, just reciting it is naturally perfect all by itself.   There is limitless benefit in reciting this mantra.

Moreover, reciting this mantra is:

In the Sutra designed as a Jewel, it is mentioned that recitation of this mantra will:

To the knowledge of me, Padmakara,
A teaching more profound and more swift (than this practice of Chenrezig and mani mantra)
Has never been taught by the Buddhas of the three times

Be motivated by faith, devotion and compassion…
Whatever appears is the form of Avalokiteshvara, in whom all victorious ones unite;
audible sounds are the sound of the six-syllable essence mantra
the absence of any ultimate conceptual reference-point is the uncontrived realm of bodhicitta
Never be separate from these three key points;
continually recite aloud the six syllable mantra- that alone is sufficient

When the dakini Dawa Drolma went to see the enlightened master Drimed Khakyod Wangpo in the pureland of Guru Rinpoche, he offered her this advice:

If one recites the mani mantra 1000 times per day:

Here is the sadhana practice of Chenrezig composed by Drubwang Rinpoche.  It is short, anyone can practice it and the benefits will be immense.  Especially if you can do it till the end of your life.  Please don’t don’t don’t underestimate this simple and most incredibly effective practice.

More on Mani mantra from this blog:

You are welcome to participate in this ongoing Mani mantra accumulation by emailing your pledge count to vajrasattvadawn@gmail.com